Allergies in simple terms mean oversensitivity of the human organism to particular substances that we call allergens. When coming in contact with these allergens our immune system reacts very strongly as it does not recognize them. The most common allergens are dust mites, mold, food, animals various medicine and especially in the springtime, hay fever (also known as pollen allergy).

When a person with allergies comes in contact with an allergen, the reaction does not happen immediately. Instead our immune system gradually increases our sensitivity for that allergen before it starts overreacting. Immune system needs time to remember and recognize an allergen. The longer it is exposed to one, the more sensitive we become to it. As a result of this sensitivity our body starts to produce antibodies for defensive purposes. This process is called sensitization and needs anywhere from a few days up to a few years to occur.

We can divide an allergen reaction into two groups – inflammations and irritations. Symptom types and signs differ – it depends on the type of allergen and can appear on skin, intestines, sinuses, nasal passage and eyes. The most common allergy symptoms are:

One of the most common allergies is hay fever, which we also know as pollen allergy. We classify it under respiratory diseases and it causes inflammation of the eye and/or nasal mucus – allergic rhinitis. The cause of it comes from oversensitivity of the human body to any type of pollen. Hay fever can last throughout the year, but it is most intense in spring months when most trees and grasses begin to bloom. In the table below we list which pollen is typical for the first 6 months of the year, according the type of trees blooming. 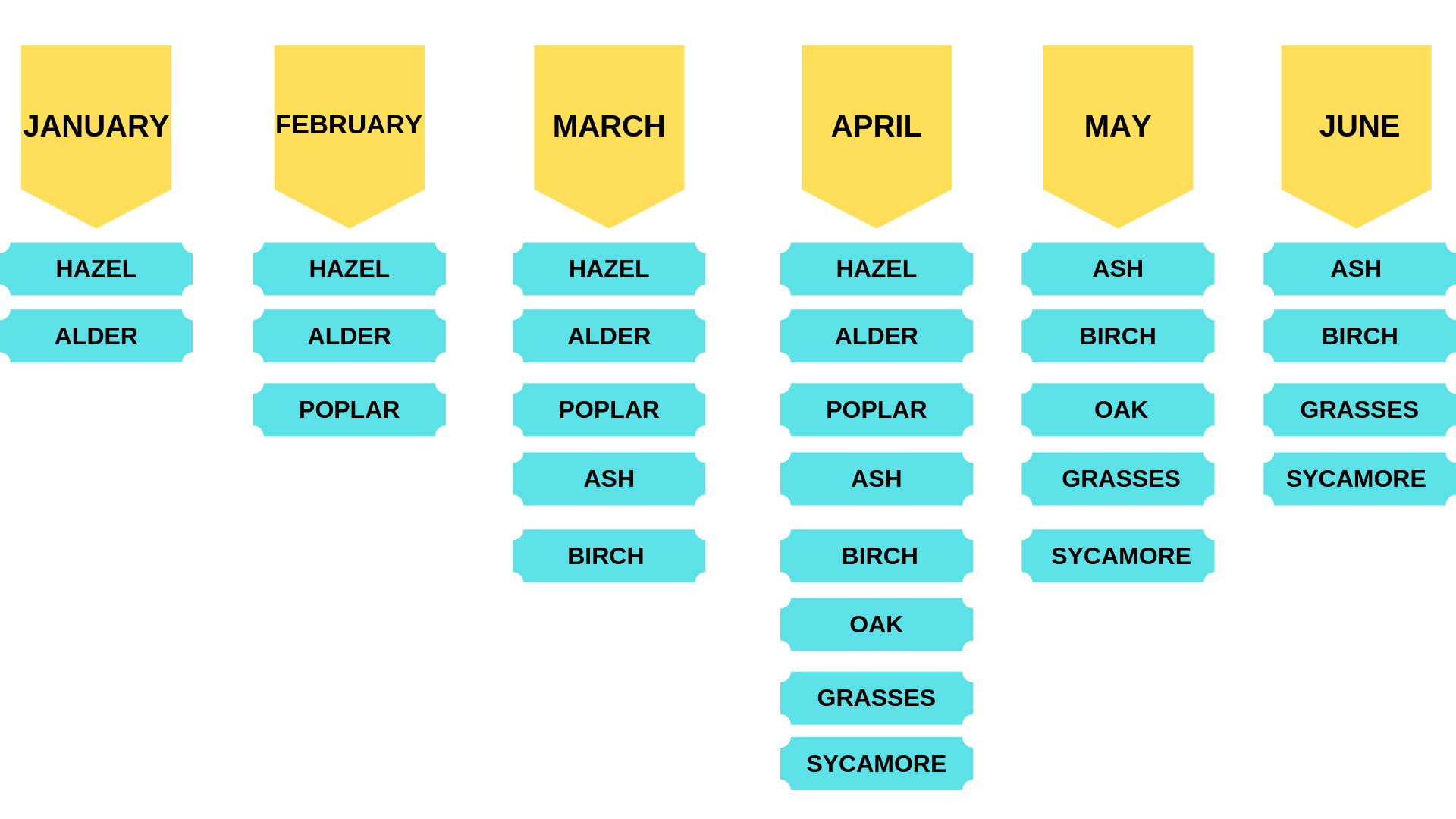 As we can see the months of March and April cause the most problems to people who suffer from hay fever. The reason for this is that we find the biggest concentration of pollen in the air in those two months. Hay fever and common cold have very identical symptoms – the difference is that hay fever can last much longer, sometimes even months! Another big problem with pollen allergies is that when we are allergic to one tree type we can also experience rhinitis symptoms from related types of trees. In technical terms, we call this sensitization.

Histamine is a biological substance that is, among other things, included into our body`s immunity responses. Our body produces histamine on its own, but we can also find it in many foods. The symptoms that we mentioned at the start of this article happen as a response of our body to different allergens. When we come into contact with an allergen (like pollen) our body releases histamine into our blood. Consequently our heart rate increases and our blood pressure drops. Elevated histamine levels can also lead to diarrhea, headache, tiredness, bloating, abdominal cramps and redness. Besides allergies, we can also attribute an increase of histamine to histamine intolerance. In simple terms, histamine intolerance means that we have too much histamine in our body, which can happen because of medicine, food or specific biological processes in our body.

How an air ionizer affects histamine

An ionizers emit negative ions which are an amazing solution for increased histamine levels. Dr. Sulman conducted scientific research in which he discovered that 10 minutes after being exposed to enough negative ions, the levels of histamine dropped by 30% in blood, by 42.5% in plasma, 42.7 in erythrocytes and 72.3 in thrombocytes. This shows that an ionizer is a very effective solution to reduce elevated histamine levels. Another important thing that we should note here is that there are no side effects using this method. Negative ions enter the bloodstream through lung cartilage.

Effectiveness of an air ionizer for removing allergies

Negative ions remove particles of allergies from the air. When the ionizer releases negative ions into the air they attach to all allergens (pollen, dust, mold, animal hair, …) and other harmful particles. As a result, these combined particles become heavy enough so that gravitation is able to pull them on the ground. Since they are not in the air anymore we can not breathe them into our lungs. Air ionizers work fast enough to clean the air as it passes through the room, so it keeps the air clean continuously. In other words, it removes allergens, especially pollen, from the air permanently.

Besides preventing allergens from entering the body, an air ionizer also affects our body in a very positive way. Scientist dr. Alan Mortlock did extensive research about the benefits of negative ions. He concluded that they help with breathing, a lot. People who were suffering from rhinitis (symptoms of hay fever) throughout the year, experienced results after only 10 minutes of negative ion inhalation. Patients that had a more severe case of symptoms needed at least 4 months to get fully cured. Inhaling negative ions is called ionic therapy and is done with an air ionizer. With ionic therapy we can completely remove symptoms of all allergies. 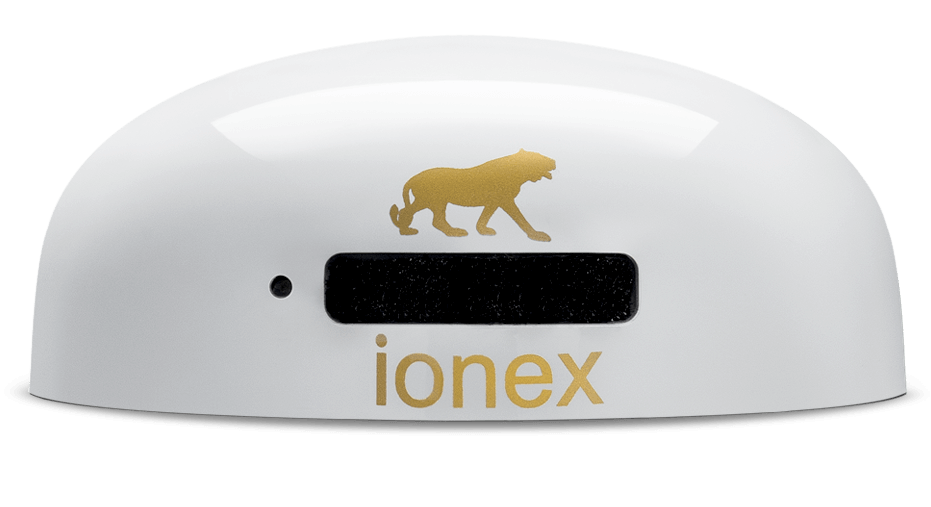 Besides better general wellbeing, many users of ionic therapy also report a permanent removal of all allergy symptoms and other respiratory problems. Many studies done by dr. Kornblue, prof. Krueger, prof. Bulatov and prof. Sulman have triggered an interest in air ionizers among doctors. As a result, many of them have started recommending their patients to begin using ionizers and ionic therapy. Faculty of Biology in Surrey has performed a test regarding the effectiveness of an ionizer in people that had hay fever. The study showed 71% effectiveness among patients, without any side effects.

Prof. dr. Wehner from USA came to similar conclusions. He developed aerosol therapy – which is basically ionic therapy (inhaling negative ions from an ionizer). His research served as a foundation for treatment of respiratory problems. He was followed by prof. Bechgaard and prof. Bennevie which included 1000 people with severe allergies. Consequently, these 1000 people were then exposed to negative ions and they all responded positive, without exception.

Difference between IONEX ionizer and other ionizers – carbon brush

Despite ionizer’s exceptional efficiency to remove allergies, they come with one weakness – ozone. Ionizers which use metal needles, plasma and membrane technologies emit ozone, which is not healthy for our body. IONEX Ionizers are the only ionizers in the world that do NOT emit any ozone. This can be attributed to a patented carbon brush technology. Carbon brush allows us to inhale negative ions directly near the ionizer itself. There is no time restraint for inhalation as well. Another benefit of the carbon brush is that is produced up to 45 million negative ions cm3 per second. In comparison, other ionizers on the market produce 5-10x less negative ions. Great customer feedback of satisfied IONEX ionizers users confirms this.  As a result of ionic therapy they were able to completely and permanently remove all allergy symptoms, using IONEX ionizer.

You can learn more about IONEX ionizer by clicking here.